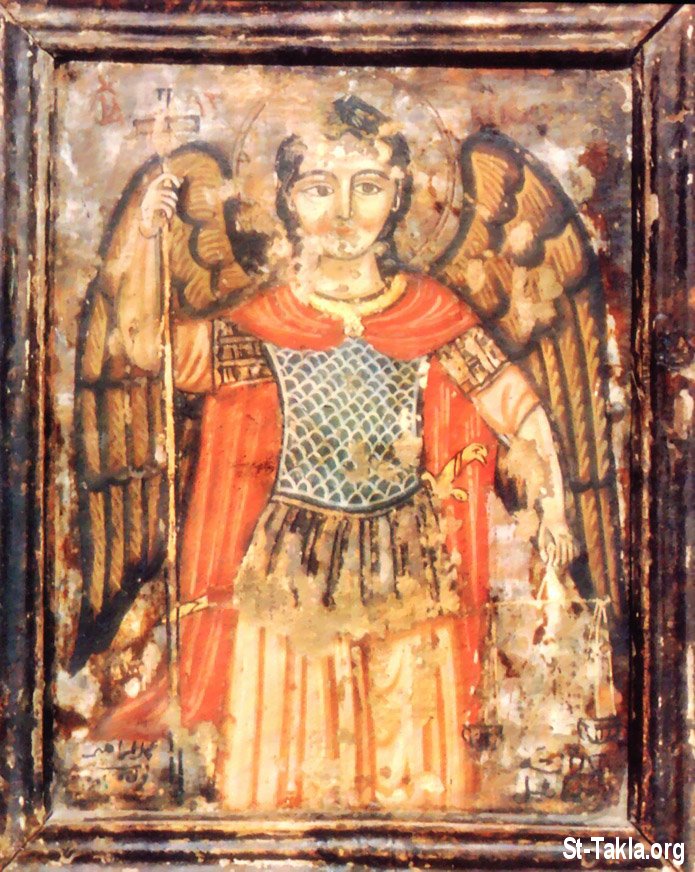 Then one day Jesus Christ appeared to the saint and told him to go to the land of "Amhara" and stay in its monastery until He talks to him again and told him that Michael the Archangel would be with him.

On his way to the land of "Amhara", Saint Takla met a monk and they both went to the monastery on a holy cloud prepared by God till they reached there in two days instead of several months.

When the saint was known all over the place, he asked God to protect him from pride, so Michael the Archangel appeared to him and told him to go to the monastery of "Saint Stephans". On the way he saw a deep river that he couldn't cross, so an angel appeared to him and asked him to follow him on the surface of the water. The angel disappeared and the saint appeared as if he was walking on land, until he reached the other side. He lived there in great awe; always praying and fasting.

One night God showed him the happiness and the glory of the saints in heaven and he became very happy; specially that he always remembered and imagined the souls of the saints.

From there Saint Takla Hemanoat got out to the land of the "Fakharany" with the guidance of the angel. He went there to a saint monk called "John" and remained there under his guidance for 12 years in the monastery of "Adgway".

The angel appeared to the saint and asked him to go to a cave down the valley. The saint said goodbye to the head monk of the monastery and all the monks went out to see him off. The monks were used to tying whoever gets down with a rope (since the monastery was on top of a hill). While Saint Takla was going down, the rope was cut and the monks were terrified, but they saw six wings getting out from his sides, and carried him until he reached the ground. The monks got back glorifying God for his greatness and for protecting his people.

THE ANCHORITE OF SAINT TAKLA'S

Our saint got down to a big desert, and he found there many saints who were used to fasting for five days and do not eat any food; but they were used to eating from the desert plants and drink from the dew drops on Saturdays and Sundays. He visited many monasteries and churches and he was very keen on visiting Jerusalem, so he went there and saw where Jesus was baptized.

Then the angel of God appeared to Saint Takla telling him to go to the land of "El-Sofan" where his grave would be, and there he should build a church bearing his name.

He last settled in the land of "Shawiry" where he built his well-known monastery known as "Elbianos". Many people followed him and became Monks. He exerted a lot of effort in praying and fasting and kneeling before God. He even used to pray standing on one foot; the right one, until his leg was broken! His monks took it and covered it. He never got out of his cave, but remained there till his death.