One day while he was practicing his hobby of hunting in the woods, God appeared to him held on the wings of angels saying: "I am your God who protected you since your childhood… Now you hunt people instead of animals. From now your name will be "Takla Hemanoat"." Then the heavenly insight disappeared. 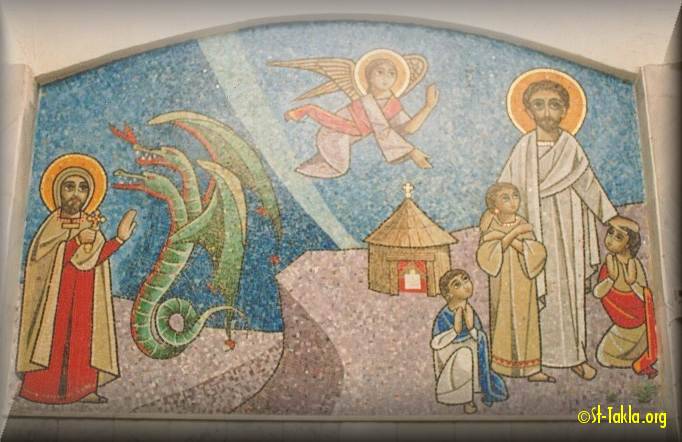 The saint heard that in "Ketana" the people worship a tree that is haunted by a devil which they fear. They were also controlled by a group of magicians. So he went there and prayed until the devil cried out: "Send Takla Hemanoat away. He is dangerous". Then the saint asked for the help of the Archangel and hence asked the tree to follow him. Its roots made a sound like thunder while it was moving and a lot of people were afraid and the roots killed a lot on the road. The devil shouted asking the saint why he was torturing him and if it wasn't enough that he left the land of "Talanes"? The saint asked the devil to confess before all the people that he was cheating and to tell them who the real God is, so the devil confessed that Jesus Christ is the real God.

The saint started preaching the people and they were all baptized. They were 111,500. They constructed a church and had their communion. As for the people who were killed by the devil; Saint Takla prayed to God to arise them from the dead. God answered his prayers. The saint baptized about 60,000 people and all "Ketana" became Christians..

While the saint was devoted to praying and fasting in the desert, he heard a voice calling him 3 times asking him to go to "Damout" because there are many people there who needed preaching. Saint Takla was asked to build a church under the name of Virgin Mary there.

While he was on his way to "Damout", Saint Takla Haymanot was haunted by many devils and he crossed himself to force them away. When he got there, he started breaking all the statues that the people worship.

The saint knew that the son of the prince was haunted by a devil; so he prayed for him and the devil got out in the shape of a monkey. The prince believed in Christ and was baptized along with his wife and son. Saint Takla was able to cure a lot of diseases and got out devils by praying to God.

When king "Montemly" heard that Saint Takla baptized his son, he was very sad and sent his soldiers to the prince to extradite Saint Takla, but the  prince refused. So the king sent more soldiers to get the prince and the saint.

When they reached the king, they were tortured a lot, but God's angel cured them. Then they were thrown in a cave full of monsters, but again God's angel got them out safely. Then the king himself tried to throw a spear at Saint Takla, but his hand was paralyzed and he cried of pain. The king then ordered the two men to be hanged on two trees. But when the saint was hanged by the neck in the tree, it bent till the saint's feet reached the ground, and there were holy lights from heaven and people saw angels… All this happened till the king at last believed in God and was baptized.