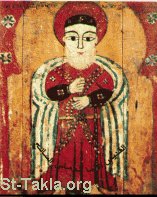 Anba Wissa, the apostle of Anba Shenouda the Archimandrite said, “In the mountain of Chencheif there was a righteous anchorite man who’s name was TOMAS and he was beloved.” And my father (Anba Shenouda) said about him, that there was no one equal to him and that our Master Jesus talked to him, the angels also came to him several times.

When the time came closer for his soul to depart from his flesh he walked in the desert and talked with my father Anba Shenouda about God’s glory. Saint Anba Tomas said to my father Anba Shenouda, “I’m going to leave you because the Lords’ angel told me that in this night the Lord will remember me. This is the last time I’m going to talk to you in the flesh, also he told me about your day. That day is the birthday of Anba Kerrolis the Arch Bishop of Alexandria and MarBoktor President of Tabanesine Monastery. On that same hour on the 7th of Abeeb, a lot of saints will come out to meet you.” My Father (Anba Shenouda) said to him, “How do I know the day in which you are going to pass away?”

Anba Tomas answered him, “I will make you a sign of wonder which is; the big stone you sat on outside of your cave, (cell) in the same time that my soul will release from my flesh, it will break in two as if an open book. You will see Rafael the Arch Angel, the one who took care of Tobit son of Tobiah in his strange land, walking in front of you and also the ones you will choose to accompany you, until you arrive to my house without a boat. Make aghabi to me for the sake of the Lord and cover my body, because I have no one else except God.” My father (Anba Shenouda)answered, “Let it be God’s will.” and they kissed each other. My father said “I will entrust you to God, until I meet you again in the church of the virgins.”

My father went back to his cave and he increased in his devoutness and prayer. After three months while my father (Anba Shenouda) was standing and praying at the stone, the stone broke in two. He sighed and said, “The Chencheif desert lost it’s beacon of light.” When he said that he saw Arch Angel Rafael pointing to him with his right hand and saying to him, “Peace to you beloved of the Lord and all the Saints. Lets go cover the saints’ (Anba Tomas) body because they are waiting for you.”

He followed him and came to the monastery at night and met a brother who was singing psalms saying, “At midnight I will rise to give thanks unto thee because of thy righteous judgment...” psalm 119:62 Anba Shenouda said to him, “Follow me.” Then he came to Anba Usab the wise writer who was singing the psalm, ”….but we will remember the name of the Lord our God. They are brought down and fallen: but we are risen, and stand upright…” psalm 20:7

He told him, “Follow me.” Then they came to brother Enoch. He was strong in courage and he was singing the psalm, “He shall cover thee with his feathers, and under his wings shalt thou trust: his truth shall be thy shield and buckler….”psalm 91:4 He told him also, “Follow me.” He entered the altar and prayed with the three brethren and then left. Arch Angel Rafael was walking in front of them until they arrived without boat. They prayed on him a lot, shrouded him and buried him in the place in which he was. Many miracles occurred through his body. He passed away in a good old age, on the 27th of Bashens 168. (452a.d.).

His prophesy was fulfilled about the passing away of Anba Shenouda the Archimandrite on the 7th of Abeeb and up until now there exists the church of Anba Tomas the Anchorite. It is about 5 kilometers north Elsowamaa east of north Ekhmeem. In that place there is a monastery by his name.


May the blessings of his prayers be with us all ……. Amen.