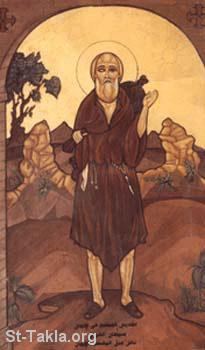 Saint Simon the Shoemaker lived towards the end of the tenth century AD. He was a contemporary of the Saint Bishop Abram Ibn Zaraa the Syrian, who occupied the seat of St. Mark in 975 AD and rested in peace in 979 AD.

A severe and overwhelming famine came upon all of Egypt under the reign of the Ikhshidid Empire, namely between AD 934 to AD 968, shortly before the Fatimid Empire was established, under which the miracle of moving the mountain took place. The miracle took place circa AD 979, so Saint Samaan must have lived through this famine, which sent more than half a million people to their early graves.

These events must have left an impression on the Saint's soul and made him renounce pleasure in worldly things- as we shall see. This was -and is- God's way of dealing with man... Cairo had been constructed only a short while before the miracle of moving the mountain took place.

Al-Mu'iz Li Din Illah the Fatimid, was a polished politician, besides being a letterman and a lover of the gatherings in which poetry was recited. He was, as well, fond of religious sciences, which made him invite the Muslim, the Christian, and the Jewish religious leaders in order to debate before him with all frankness and freedom, and without any anger or contention.

This matter has a direct relationship with the miracle of moving the Mokattam mountain, as we shall see later on. Saint Samaan the Tanner worked in one of these handicrafts, which was tanning the hides of animals. This Saint appeared suddenly on the scene of historical events as a shining star, and disappeared just the same way. History does not mention anything about his early upbringing at all, so we do not know where he was born, or where he was reared up, or who was his father.

When the Saint was practicing his work as a shoemaker, a woman came to him to mend her shoes, and this woman was beautiful. It so happened that when she was taking off her shoes, her legs showed and he looked lustfully at her. But at once he drove the awl into one of his eyes, thus plucking it outin keeping with the commandment of the Lord "But I tell you that anyone who looks at a woman lustfully has committed adultery with her i his heart. If your right eye causes you to sin, gouge it and throw it away. It is better for you to lose one part of your body than for your whole body to be thrown into hell." (Mt. 5:28,29). St. Samaan simply carried out the commandment literally!!

And histiory tells us of a great miracle that happened with his prayers, which is the miracle of moving the Mokattam Mountain in Cairo.. for more details about that, vistit his church's Web site from the links' section.