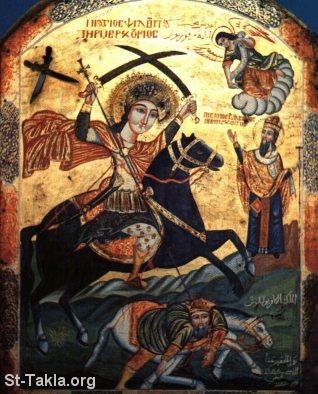 Our saint was born in the year 225 AD of pagan parents, he was named Philopater (a greek name meaning "Lover Of the Father"). His father and mother soon changed to christianity, and preached, gave alms and tought their son according to the christian teachings. Reaching the age of 17 Philopater already joined the Roman army, and soon enough gained a great reputaion as a swordsman, and a good tactician for many battles.

In the reign of the Roman emperors Decius & Valerianus they sent out a decree that all people of all ranks slave or freeman should offer sacrifices onto the Roman Idles, & those who disobey the decree would face a death penalty. Soon after the edict War broke out between the barbarians and the Romans, 2 armies fought fiercely against each other. One day at the peak of the battle Mercurius (Philopater was named Mercurius when he was promoted to the rank of command) had a vision, he saw a man surrounded by light holding a drawn sword in his right hand, handing him the sword, telling him that he would have victory over the barbarians, and to remember the Lord, our God after the battle.

Our saint then took the sword and dashed into the midst of the barbarians and mowed the enemy down like grass, he attacked so strongly that he slayed their King, his company & many others, the barbarians were terrified they broke down and fled, the Romans were victorious. Thereafter, Mercurius was given the title "Supreme Commander Of all the Roman Armies" at 25 years of age. The hero Mercurius became preoccupied with his new life, & every city that was passed a festival was held in his honour.

One night an angel appeared to our saint & told him that he would suffer greatly for our Lord Jesus Christ because of the decree but he will receive a crown of victory in heaven. Later on Decius called on our saint for some matters of state, after a while Decius suggested that they all go to the temple to offer sacrifice to the idols, the hero slowly slipped away from the crowd, but a jealous soldier informed Decius that the hero Mercurius wasn't present because he was a christian, the emperor didn't believe this & wanted to see proof with his own eyes.

Later on he found out that our saint was a Christian after Mercurius boldly confessed his christianity before the emperor. The emperor at first tried to convince our saint to leave christianity, then he started inflicting many grievous tortures on our hero by burning, ripping his flesh with nails, but through all this the Lord saved our saint from his troubles until in the end he received the crown of martyrdom by beheading, at 3 o'clock 4th December 250 AD.