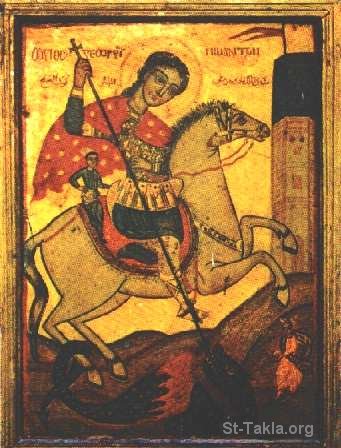 St George was born in 280 AD in Cappadocia, Asia Minor. St George's father was martyred for being a christian, when our saint was nearly 17 years old. Our saint grew up with alot of faith and love in God. After the martyrdom of our saints father his mother had an aim to see her son grow stronger in the faith, through good deeds, and virtue. St George had joined the Roman Army at 17, & gained many victories, he also had the rank of Tribune. St George lost his mother when he was nearly 20. From then on our Saint abandoned the pleasures of this world, and distributed his possessions among the poor, & set his slaves and maidservents free.

The Emperor Diocletian, was ruler of the Roman Empire at the time, and he had just sent an edict to destroy the churches, burn all christian books, dismiss christians from their jobs, take all their possessions, make most of them slaves, and make them offer sacrifices, & burn incense to the Roman gods.

St George was at Alexandria at the time when he saw the edict he read it and tore it up, the roman soldiers then took him to Cappadocia to receive punishment. As our Saint had great favour with the emperor the ruler of Cappadocia transfered the matter to Diocletian. Our saint then confessed to the Emperor the true Christian faith. The Emperor jailed our saint, and then sent a lady to try to seduce him, but instead our saint converted her to the faith, hearing this the Emperor ordered her beheading & she received the crown of martydom. The emperor then stretched our saints arms and legs with chains, & placed a huge stone on his chest, then they pulled the saint over iron spikes till his flesh was torn etc.., they also passed flames over his body to burn his wounds, & spread salt over the wounds to increase the pain. When he was put back in his cell the Lord appeared to him, embraced him, and strenghened him.

St George also experienced many more tortures for 7 years, many people were also converted to christianity because of the many miracles which they bore witness to. At one time St George raised a dead man by the power of the Lord Jesus Christ and many more believed, and so many more were martyred. In the end when our saint was beheaded, the heathen Roman Emperor Diocletian died a terrible death.