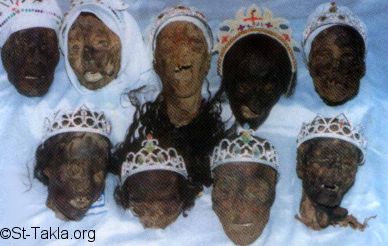 At the 29th of Kiahak 303, people were filling the big church of "Soutir" (Saviour), and they spent the last night praying and praising the Lord, in the preparation for the Holy Nativity Mass, which starts in the third quarter of the night. Bishop Odagious, their beloved pastor was not there with them, as he died from a while. They heard that the evil ruler of Ansna "Erianos" was coming to their town with his soldiers. So Bishop "Abadion" went secretly (because he was arrested before) to them to pray with them.

After the prayers finished at dawn, the ruler of the town went to the idols temple, and was filled with hatred for the Christians, because the idols' priests talked bad about them. So they went to the church and found thousands of Christians praying there.. So Bishop "Agfa" and Bishop "Wanin" went out to talk to him, and he asked them about the reason for this gathering. They told him that today was a feast for the birth of Jesus Christ.. He was so mad, and killed them both at once, so they became the firstfruits of Akhmim's Martyrs.

Then the ruler and his soldiers called all the Christians to come and bow and worship idols.. All people challenged him, and confessed their faith in One God.. Jesus Christ.. And said that they are ready to die for Him.. And when the ruler noticed their strong faith, order to kill all the priests (of whom Father Asconda, who drew to Christianity 70 of the idols' priests), and deacons followed them.. and many of the people.. they were few thousands..!

And when the ruler saw that they were full of faith and bravery, he put torture instruments.. That continued for three whole days! The number of martyrs at that time from Akhmim was 8140 martyr! (from 29 Kiahk till 1 Tooba).

May their prayers be with us all, and glory be to God forever. Amen.